As you all probably know, much of the furious anger at Saturday’s defeat is yet to subside. It’s a minefield out there, folks. You need only once inadvertently say the wrong thing – usually positive – to have the combined wrath of Twitter fall upon you.

I wouldn’t really want to dispute with anyone about their right to be angry. God knows, I’m angry. We lost in the most pathetic way imaginable in a game that was of huge significance. Had we taken a moment to envisage the worst case scenario before kick-off, the thoughts and views conjured would probably bare striking resemblance to that which occurred.  It was an altogether sh*tty day – compounded for me by a startling shaving error that resulted in the need to remove the vast majority of my beard.

However, all that is done now. It’s gone; the past. It has to be put to one side.  Wednesday brings another vitally important game and the focus now should be entirely on that.

Reading through a lot of stories today has brought my attention to the way our players have reacted, and they’ve reacted well.  They know both individually and collectively that what the showed on the pitch at Anfield was poor and needs to be rectified as swiftly as possible. For example, Alex Oxlade-Chamberlian said this:

“We are very disappointed, especially with the first half. We know we are better than that so in that sense we are gutted.

“But these things happen in football and it is our responsibility to turn that around and we have great opportunity on Wednesday night.

Mikel Arteta has also spoken of the reaction, this time from Arsene Wenger. Most would assume the Frenchman to be an assured and calm figure under pressure, but it appears he can get angry when the moment takes him:

“We have to react because there is nothing we can do about this now. We know we need to improve and face those games in a different manner because after 19 minutes we were 4-0 down and it was like a car crash.

“The manager was really upset at half-time, that’s normal because it wasn’t good enough for this football club. It was the angriest I have seen him.”

Don’t think Arsene has it in him to be shouty and rowdy? I noticed this doing the rounds on twitter from Theo’s book: 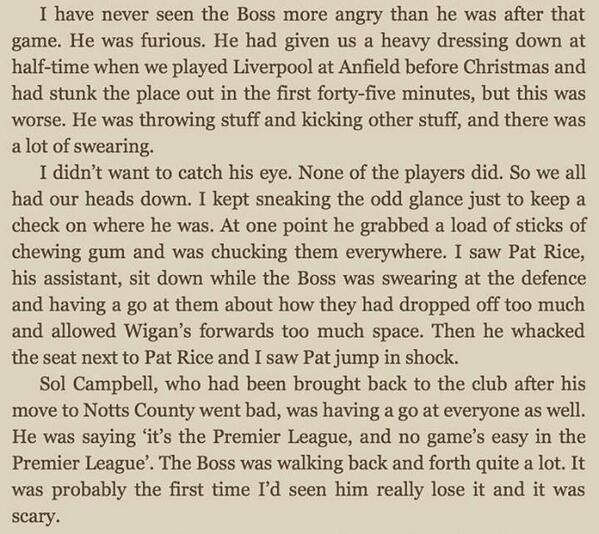 I take some heart from all the honesty being shown. No one is hiding and they’re all happy to accept fault. As good as it is, it needs to be coupled with a reaction on Wednesday. United might be floundering in mediocrity, but the’ll be up for the game and as eager to start turning the corner as we are now. Any team with an attack of Rooney, Mata and van Persie will be dangerous and we have to accept it’s going to be another very challenging fixture.

Meanwhile, in one of those look-it’s-getting-worse-for-Arsenal! stories the media just love to publish when the chips are down, it’s been ALLEGED – I say ‘alleged’ in capitals because it’s in the Daily Star – that both Fabianski and Sagna will turn down new contract offers from Arsenal and make for pastures new in the summer. Fabianki I can understand being allowed to leave given his lack of first-team opportunities, but I’d hope the Club do more to secure Sagna to an extension.

It’s funny how stories like these emerge at certain times. Since losing to Liverpool, we’ve had leaked ‘reports’ of a training ground tear-up between Mertesacker and Sanogo as well as the tall-tale surrounding Olivier Giroud’s night of unbridled passion with some dubious trollope most probably after her 15 minutes of fame. I can’t help thinking it’s all a bunch of spurious drivel being used purely to capitalise on a bad period for Arsenal. Lazy journalism.

Other than that, there’s not much more to say. I could mention a story I read about a summer bid for Gareth Barry, but I feel physically and mentally violated every time I think about it, so I’d rather not.

That’s all I’ve got time for today. You know the drill; head towards the wonderful comments section and drop me a line with your thoughts of the recent events and fallout. There’s still a lot of football to be played; plenty of twists and turns to be navigated along to the tumultuous road to May. It might feel like the world has ended, but it hasn’t – not by a long shot.

6 thoughts on “Arteta, The Ox and Arsene, Post-Liverpool Fury and Two Refuse Deals.”